When I was in the midst of my Full Stack Bootcamp, I was involved in a project where one of the requirements was to access an API. The instructor came by to the evaluate the proposal, and questioned the value of the project. He said why would anyone use the project when one could look up the same information on Google?

I didn’t have an answer then; I do now.

Back when I was taking the Front End Engineering Bootcamp, I made my own Astronomy Picture of the Day (this is encouraged by NASA, using their API). The images on this page show my version and NASA’s version of the APOD. In my opinion, my version is cleaner, less cluttered, and shows only the information that I’m personally interested in. 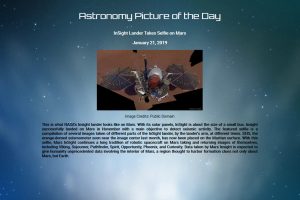 Similarly, yes, I can find out the local weather through any number of local weather apps. But I created my own through the Open Weather API, and it delivers a personal weather report giving all the information I want (and no excess information that I don’t need to see). I also coded a 7-day-weather forecast for an input city, and coded a current weather display for an input city. I use those to check out the weather where the Twins or Vikings are playing. It’s quick, it’s easy, and it’s accessible to me.

My movie search through the OMDB, is, I feel, much less cluttered than a Google search of a particular movie, and is also quick, easy, and accessible.

In summary, go ahead and make your own apps, even if you can get the same information elsewhere!

Since I graduated from The Iron Yard, I’ve turned my attention to my own websites, of which I have several, to rewrite them and improve them. As I anticipated, real world experience is a little different than the experience in the classroom.

I’ve started with 2 sites: a site promoting me as a web developer/social media expert/video provider at http://websites.co.technology, and an informational site featuring my healthy living books at http://weightlosssuccessbook.com.

I wasn’t far along in developing these sites when I realized I would have to learn some additional skills in coding: working with social media widgets, for instance. But, I knew enough to realize I needed to find the developer’s area of Facebook, Twitter, etc. to get the code that I needed to put a social media widget or badge on a website. Once there, I needed to select the options I needed, and modify the code for the website, and again, the concepts I learned in class helped me to get everything working. In some cases, the process was fairly clear. In others, I had to search through the developer part of the site before I found the code or the combination thereof to use. I got one widget working in a timely manner. Another didn’t work, so I had to keep going back until I found a section that had code that worked for me. Yet another time, I kept getting error messages which did not make sense. So I did what I remembered hearing in class: I copied and pasted the error message right into Google, and immediately Stack Overflow said that the code wouldn’t work in a simulator, or even localhost…it would only work on a live web page. And indeed, that’s what did work.

I found some curious omissions, such as getting error messages because of the absence of “http” in the code for an “src=”…when I inserted the “http” it worked, but I wonder why it was missing in the first place.

Some code worked…and then it didn’t…and then it did…and then it didn’t. Same code.
Also, as I mentioned earlier in this blog, the documentation for these and other items was sometimes frustratingly obscure. Again, I learned enough in class to eventually determine what was going on by myself, but I can definitely see how, when I was just starting my classwork, I was not able to grasp some of the coding concepts explained in online documentation right away. They definitely presume that the reader knows things that a novice may not, in fact, know.

In spite of these obstacles, I got the 2 websites working satisfactorily. (I even successfully added a favicon and web counter to each site!) Now to see whether I can get my other websites updated as well. 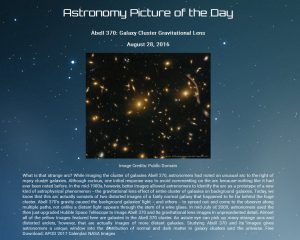 Similarly, I made and styled my own weather app from the Open Weather API (the Open 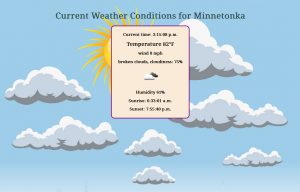 Weather API essentially says, “go ahead and make your own weather report using our data”). I realize there are a number of weather apps out there that users can customize to their personal tastes, but this is my very own weather app that I specifically styled to my own personal tastes and I am happy with it.

It occurred to me that this is the goal of coding (or more specifically, front end web development): to make applications/web pages that present users with the information they want in the style they prefer. I find this both challenging and exciting, and is one of the reasons I find coding so much fun.

My project for Demo Day was nearing completion this week. I made the pages responsive, mostly with the use of the Aphrodite library. I also added a “print” button to the main directory page. Right now all that I may need to add are more test entries and perhaps some minor styling changes.

With the Demo Day project well on its way to completion, I spent time this week learning additional skills by working on additional projects. I built an online portfolio, with screen captures of projects I have completed, and links to both the code on GitHub and to the working web pages. The portfolio page also contains a summary of what I’ve learned at The Iron Yard.

I felt a great sense of accomplishment on Thursday when the API call that I sent to the Open Weather API worked on the first try. I spent most of the rest of the day on Friday building my own weather app, which I’ve wanted to do ever since The Iron Yard Crash Course I attended before starting week 1.

Our campus director started talking about job seeking skills this week, which was most welcome. She invited us to find three job listings for web developers, and I was pleasantly surprised to find four that I felt I was qualified for.

Next week is week 12…even more learning to come!

This week I started my project for Demo Day and worked on it for most of the week. I was very pleased with the progress I made this week, and even more pleased with the fact that I was learning more ways to use JavaScript and ReactJS to build a web page. For example, I wanted to make a list from a string where the entries were separated by carriage returns. The method I first tried resulted in error messages. So I searched on Google for a technique that would work and was directed to stackoverflow.com, where I found an example that was similar to what I wanted to do. In particular, it suggested that the method be placed between the render and the return, instead of within the return. I did and it worked. I have searched Google for information on other techniques I have wanted to use, and have found it (and stackoverflow.com, among other online resources) to be helpful. I’ve also been using Trello to keep track of the features that I want to include and my progress on those features (those not started yet, those in progress, and those which have been completed).

I also made more progress on preparing an online “portfolio” of my work. I have three projects in place and visible (a chat function, an API call to the omdb media database, and a “guess a number” game), but need a unifying home page. That’s still in the beginning stages, but taking shape.

Our class took a field trip to Best Buy headquarters to talk to the web developers there. They gave us a tour and answered our questions. It was informative to learn about what sort of work they do, and what sort of knowledge and skills are required in their jobs. They’ve offered a place there for our Demo Day in September.

Continuing work on the Demo Day project next week. Still having fun!

The week started out on Sunday when I took a look at some code that Jim had introduced to us about a month ago. At the time, I had only a vague idea of what the code was for and how it worked. Now I realized that I understood it fairly thoroughly. (Progress!)

Early this week, we all worked on getting our chat functions working with Horizon, placing data on a web page for retrieval. Wednesday we had a lecture on Java (even though our course is front end web development) so that we would have an idea of what it was about and what it did. Thursday, our class voted to have Jim go over APIs and jQuery (he included Bootstrap as a bonus), all of which was very useful. For the afternoon lab session, we were asked to develop code to get data from an API with  jQuery, and at the end of class I was feeling discouraged because I had been unable to make a successful connection to the server. After a brief discussion on Slack in the evening, I was back on track on Friday and made a successful API retrieval using jQuery. Not only that, but I felt I understood the jQuery code clearly.

I have been going over previous assignments and improving the code and functionality in preparation for building an online “portfolio” of my work. I am very pleased with myself for taking code that I wrote only 2 weeks ago and making significant improvements to the style, functionality, and sophistication. Friday afternoon, Jim went over with me how to place that code on one of my web pages to start the online portfolio.

Friday morning we also went over my project for the upcoming “Demo Day” in detail, mostly diagramming it on the board.  Working on this will, I expect, take up a significant part of the next 3 weeks. I feel excited about getting started with it.